Katakolon is a seaside town in the of  in Western Elis (Ilia), . It is situated on a hill, overlooking the Ionian Sea and separating the  from the rest of the Ionian.
With its close proximity to Ancient Olympia, the birthplace of the Olympic Games in classical time, Katakolon is considered as one of the most touristic places in the region. The of  is a popular stop for cruise ships, offering passengers an opportunity to visit the site of . Visitors here usually seize the opportunity to visit the ancient stadium of .

Katakolon is a small town full of jewelry and souvenir shops. Besides that, there are lots of restaurants- particularly fish restaurants due to the fact that it’s a coastal town. 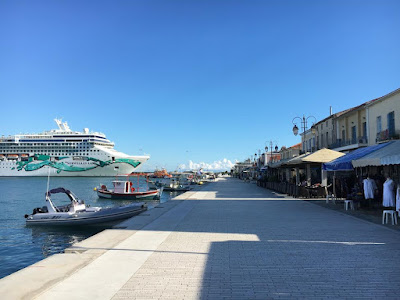 The port has a history that dates many decades back. It began its operation as a touristic center since the early 20th century, while European travelers arrived at it since the 19th century. The main reason why European travelers visited Katakolon and at that time was their interest in antiquities and the beauty of the area.

Katakolon functioned as a commercial port even since the Ottoman period. This was intensified since the 1870s, when it became one of the main ports for the export of currants. The role of this product was of such importance that allows us to talk of a culture based on currants.

Furthermore, Katakolon had very close cultural, economic and social ties, primarily with the of and secondarily with the .
We truly believe that the restoration of the transport to the southern will have very positive impact for both Katakolon and these islands.
In those early years of tourism, Katakolon was “faithful” to the idea of cruising which initially seemed to take the wrong orientation since the commercial part was smaller than expected. Furthermore touristic activities had just started with undefined results at the time and so suspiciously missing the dream of tourism.
Professional fishermen in the region experienced the inhuman conditions of occupation during the civil war and managed tooth and nail to feed themselves and their families through the sea by selling fish to the aristocracy.

Today, the port is one of the major entry ports for tourists who are coming to to spend their holidays. Katakolon port starts to have cruise ships usually during the beginning of April till the end of October. In summer time (June-July-August) there might be even 3 or 4 cruise ships in a day. Based on this figure, it can be estimated that more than 500 tourists come through the  on a daily basis. According to the Tourism Minister of , the of  nowadays has the second busiest cruise traffic in after . 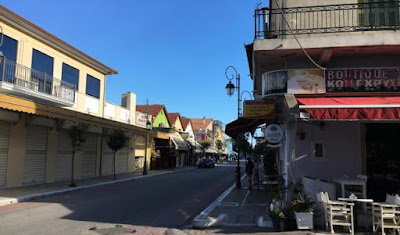 Today's goal of the port is in principle to develop the ability of mooring for the third generation ships – above 350 meters of displacement which will be achieved by the gradual expansion of the port and also the home port option of disembarkation for tourists in cruise ships approaching the Katakolon port.

Along with exports of goods, tourism is expected to constitute one of the main sectors that will contribute towards the recovery and growth of the Greek economy in the coming years by assisting in attracting investments, supporting other economic sectors and boosting employment. Tourism has already contributed decisively in this direction since it recorded an impressive recovery in 2013, and it assisted significantly in intercepting the downward spiraling course of the Greek economy in the period 2008 - 2013. It then went on to post impressive results in 2014 and 2015.

With tourism being the main source of income for residents of Katakolon, there is a need to emphasis more on how local residents think about tourism and how the political and economic conditions in the region affect their daily lives. In an interview with a couple who lives in Pyrgos and owns businesses of both market and jewelry shops in the center of Katakolon, they were clear about the economic conditions the country is currently experiencing:
"Greece is having tough times, we are all aware of this. Tourism was strong in past years. It kept us well. But then the Turkey-Russia issue came up this winter. I thought that things would go really bad for Greek tourism, although all my friends were so happy! They were telling me that all tourists from will now come to , they will not visit because of the issue. But I told them that they were thinking in a wrong way. If there are no tourists in , it means that there will not be any tourists in ; because tourists who come from east go firstly to and then come to . This way is cheaper for them and also they can visit both and without spending a lot of money. My friends didn't care about what I said then, but now they say that I was right. We have less tourists than last year. And I believe that it is because of Turkey-Russia issue. Whatsoever happens in our neighboring countries affects us as well.”

Also worth noting is the fact that there are many young people who work in Katakolon, which is something positive given the high unemployment rate among youth in the country. Most business owners are aged people but their employees are usually young ones around 20-30 years old. Many of them are students coming from various cities scattered around but come to Katakolon and Pyrgos during summer to seek employment.

Despite the fact that around two to three ships are coming in at the port daily, local business owners are still not satisfied with the number of tourists. They are complaining about this year’s figure, saying that the number of tourists this year is relatively low in comparison to last year’s figure. Additionally, there have been only a few festivals, exhibitions and events organized in the seaport town and Pyrgos this year, which can, to a larger extend, be considered as a disincentive to tourists coming to through the port.
Most of the local business owners don't have any idea on how to improve Katakolon:
“I don't know why this year was like this. I have been working here in Katakolon for 3 years now, every summer being here in this cafe. Ships do not stay long, so the tourists do not have any chance to stay longer and do more things here. Katakolon is unfortunately only a break for them. They come to eat and drink, and some of them go to the beach for swimming. That's it…
Regarding the independent travelers who come here and stay for 2-3 days, they always complain about the expensive means of transportation. They also find that there should be more public transport... The truth is that it wasn't like this before the crisis.
I believe that we can change this bad image about our region by enhancing the social life here. I honestly don't know how to do that. I only know that most of the people here are aged. If there were other kinds of entertainment, like beach bars or alike, there would be lots of young people.”

In conclusion, businesses in Katakolon try nowadays to survive. They are tired of how politics can affect this small, touristic port city. They can’t help thinking from time to time of moving to another city instead of staying and waiting for better days to come...

They are aware that economic crisis affects them in every way but they still believe that the tourism industry will go better in the not too distant future.
Both businessmen and workers share a common vision; they want a better and well-known Katakolon.
Besides, Elis, and the whole area is full of archaeological sites, monuments of nature and monuments of modern era and Katakolon is the main gateway to this mythical world.